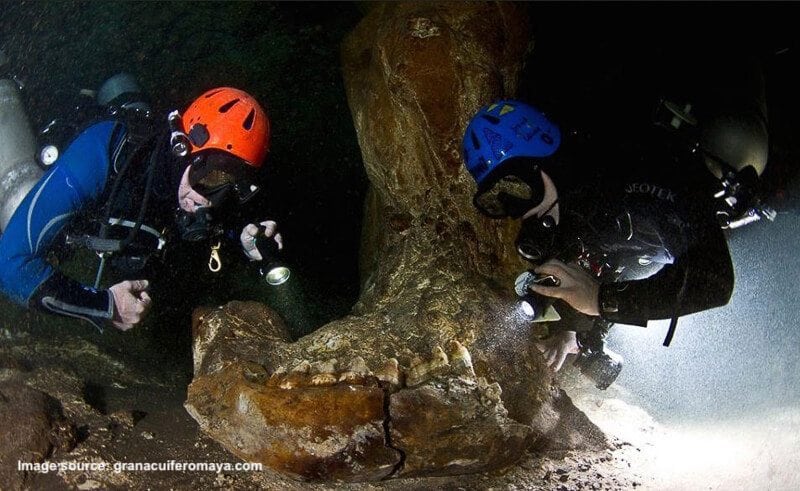 Over the last six months, an expert team of archeologists, biologists, underwater photographers, and specialized cave divers have joined together for an ambitious project known as the Great Mayan Aquifer. It’s mission: to explore the extensive network of underground rivers and caves that permeate the subsoil beneath the Riviera Maya and document not only the Ice Age and ancient Mayan artifacts found within, but also to create a framework to protect what may be the world’s largest freshwater aquifer.

Some of the Riviera Maya’s most stunning attractions have nothing to do with the blues hues of the Caribbean Sea and those inviting white sand beaches.

Called cenotes, they are enigmatic and still largely unexplored.

These mesmerizing bodies of water found in and around Playa del Carmen, which the ancient Maya considered to be portals to the Netherworld, are largely interconnected through a series of underground, flooded cave systems. 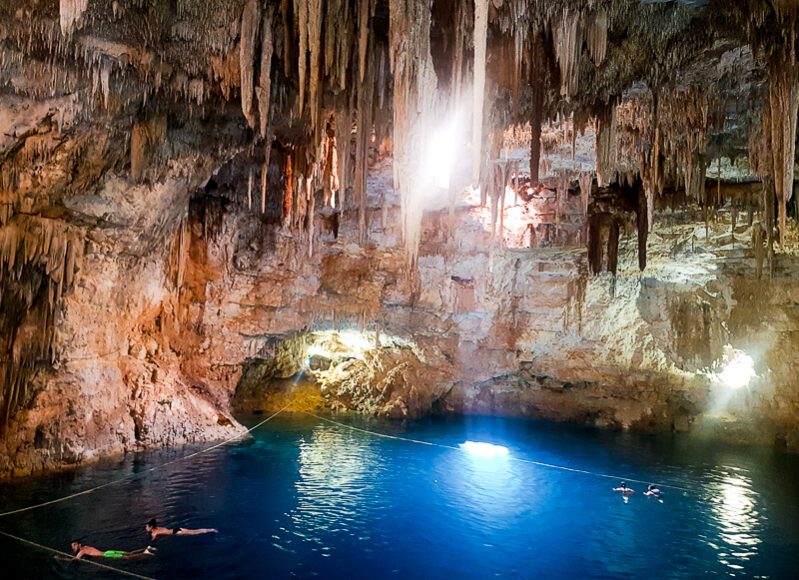 They represent the longest underground rivers in the world and are the only source of fresh water for the entire region.

Just in the short, 62-mile stretch of land between Cancun and Tulum lies a network of caves that weaves its way through the subsoil through approximately 826 miles.

To put that in perspective, the entire coastline of the Yucatan Peninsula is around 685 miles long.

What is a Cenote To understand these mysterious bodies of water it’s first important to know what they are.

The original word for cenote is dzonot, meaning “deep well” in Mayan.

The Spaniards who conquered the region understood the word to be cenote (pronounced ceh-no-teh).

These bodies of water were a vital part of both the survival and the cosmovision of the ancient Maya.

On the one hand, they served as a major source of water for the entire region. In fact, almost all communities are built around or close to cenotes, and the major pyramid at Chichen Itza, known as Kukulkan, was built directly over one. 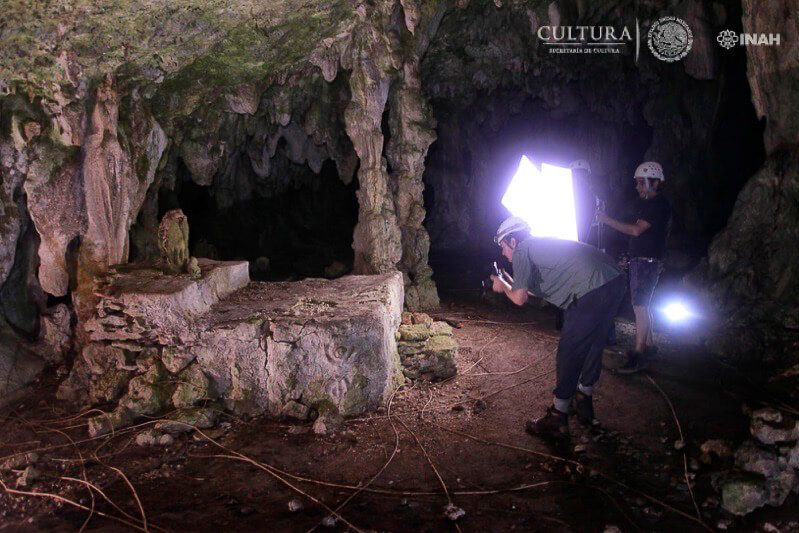 But on the other hand, the cenotes also played a role as one of the major dimensions in their cosmovision, which divided the world into the heavens, the earthly realm, and the Netherworld, or Xibalba.

For the Maya, the cenotes served as gateways to this third dimension of reality.

Today, we now know that they are also the portals to perhaps the world’s largest freshwater aquifer and the only source of its kind in the entire Riviera Maya.

How Cenotes Are Formed 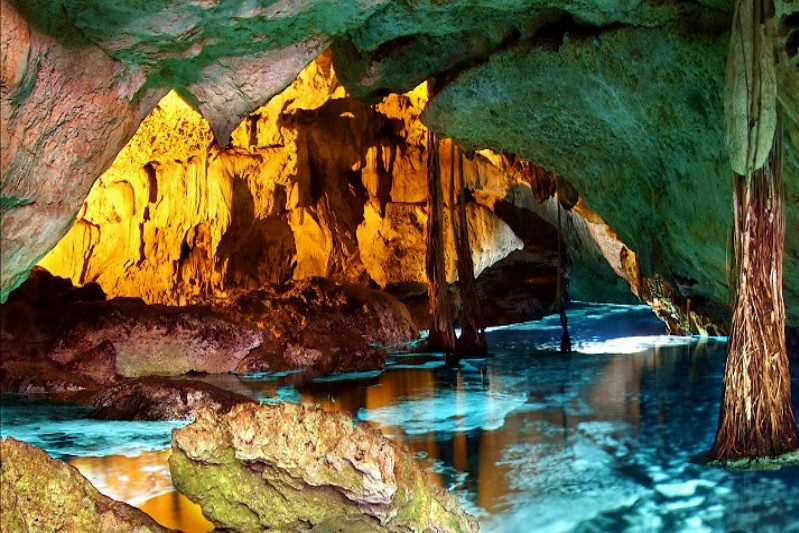 As mentioned above, cenotes are basically the exposed parts of a large system of flooded caves that stretch throughout the Yucatan Peninsula all the way from the Caribbean Sea to the Riviera Maya.

Throughout the centuries, mostly as part of a process of natural erosion. As the limestone bedrock collapses, the Earth surface begins to expose these cave systems, creating a relief known as karst and the phenomenon we know today as cenotes. 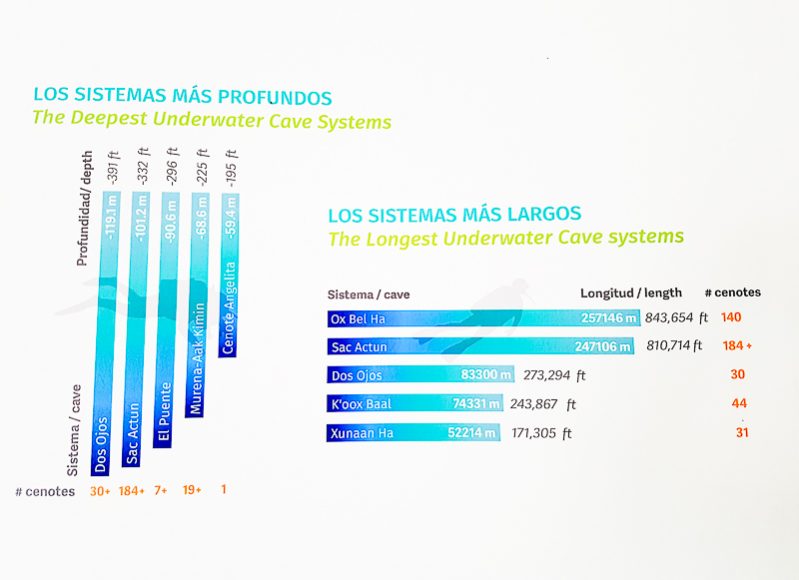 While almost all are interconnected, some are more independent than others and some form part of larger, more complex cave systems.

Depending on their stage of development, a number of different types of cenotes can be found throughout the region. 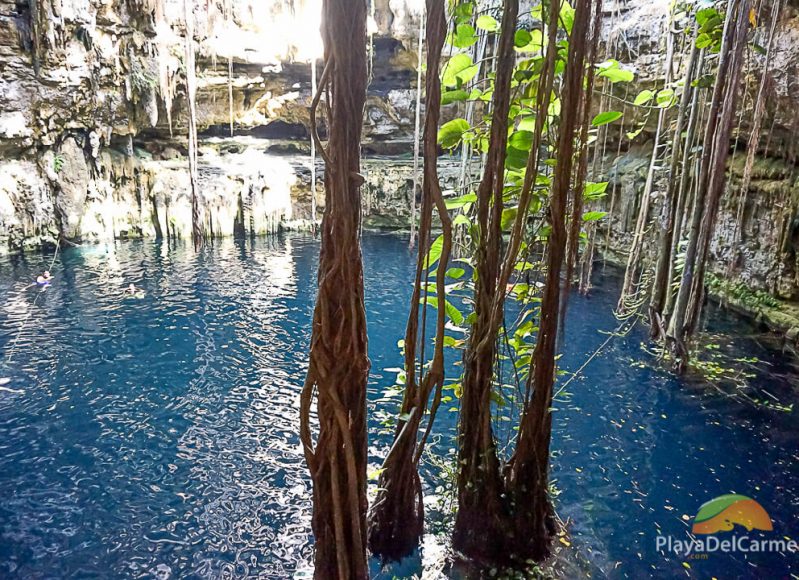 Here are the four principal types of cenotes you will find in and around the Playa del Carmen region:

The Great Mayan Aquifer is a joint interdisciplinary initiative between Dr. Guillermo de Anda Alanis, head investigator in the project and National Geographic Society Explorer, together with the Technological University of the Riviera Maya, the Aspen Institute Mexico, and the Latin American Development Bank.

The initiative’s objective is, “to conserve the natural and cultural patrimony of the subsoil of the Yucatan Peninsula through an investigation about the delicate relationship between the aquifer, the environment, and human beings.” 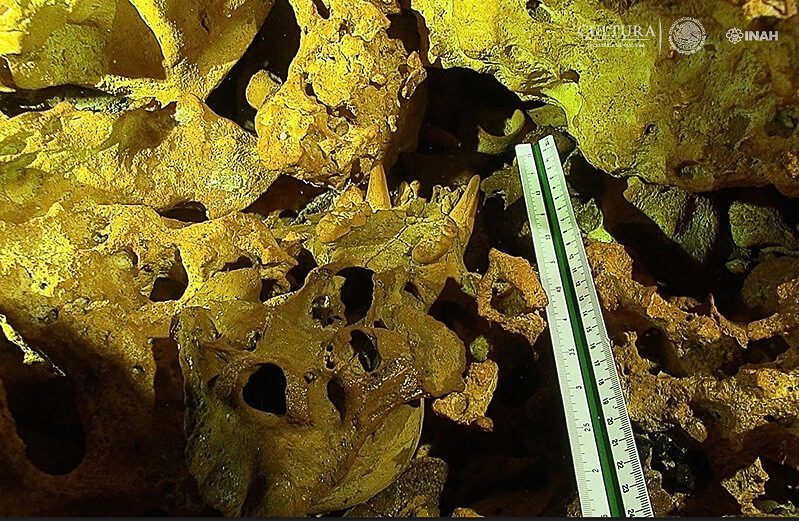 Through workshops, conferences, and roundtable discussions, the preliminary results of the investigation were discussed, and a proposal was made to have the Great Mayan Aquifer declared as mixed natural and cultural patrimony and thus deemed a World Heritage Site by the United Nations. 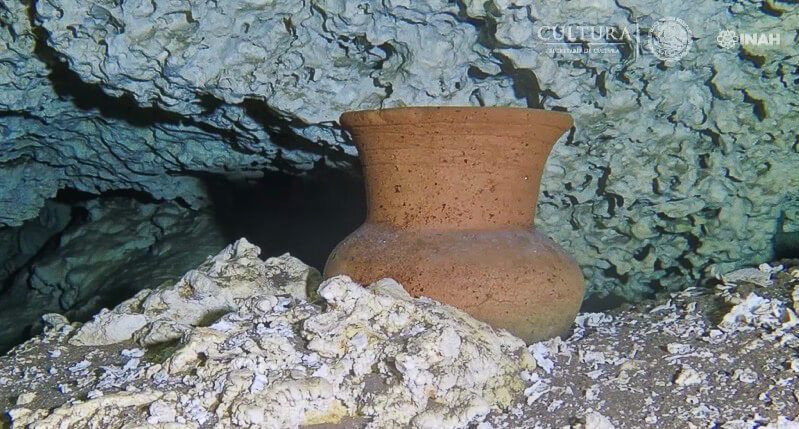 “The flooded caves, the Mayan altars that have been found, the remains of flora and fauna as well as human remains are what would justify this declaration, but just by being a cavernous system that houses possibly the largest hydraulic system in the entire world is what justifies that it be considered the subject of a patrimony declaration,” said Pedro Sanchez Nava, national coordinator for archaeology at Mexico’s National Institute of Anthropology and History.

According to specialist Guillermo de Anda, “We have a treasure of freshwater in which some of the world’s last frontiers can be found, and an invaluable cultural patrimony from the early humans until the Mayan population, including from the colonial period, which offer extraordinary answers to be better understand the development of the Yucatan Peninsula.” 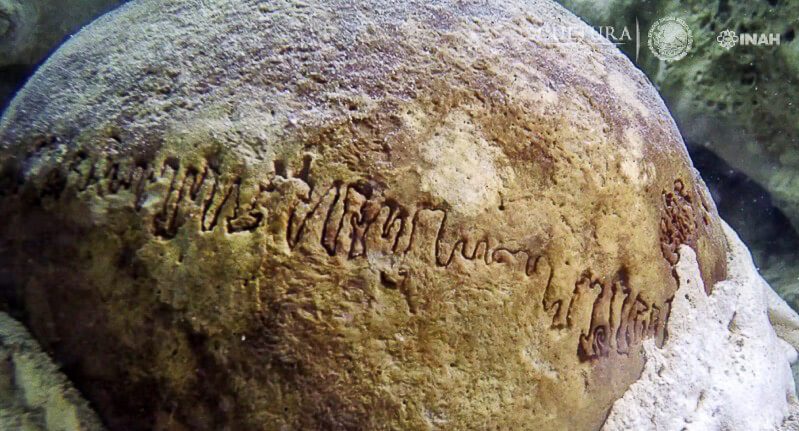 Over the years, the investigative team has found numerous remains in the region, including those of Naia, a skeleton of a teenage girl dating back 13,000 to 12,000 years.

More recently, however, as part of the Great Mayan Aquifer project, new findings have created even more excitement about what will be discovered during this ambitious five-year project.

During an exploration of the cenote called El Pit, De Anda and the subaquatic explorer Robert Schmittner discovered what appears to be the skulls of bears from the Arctotherium species dating back to the Pleistocene period. 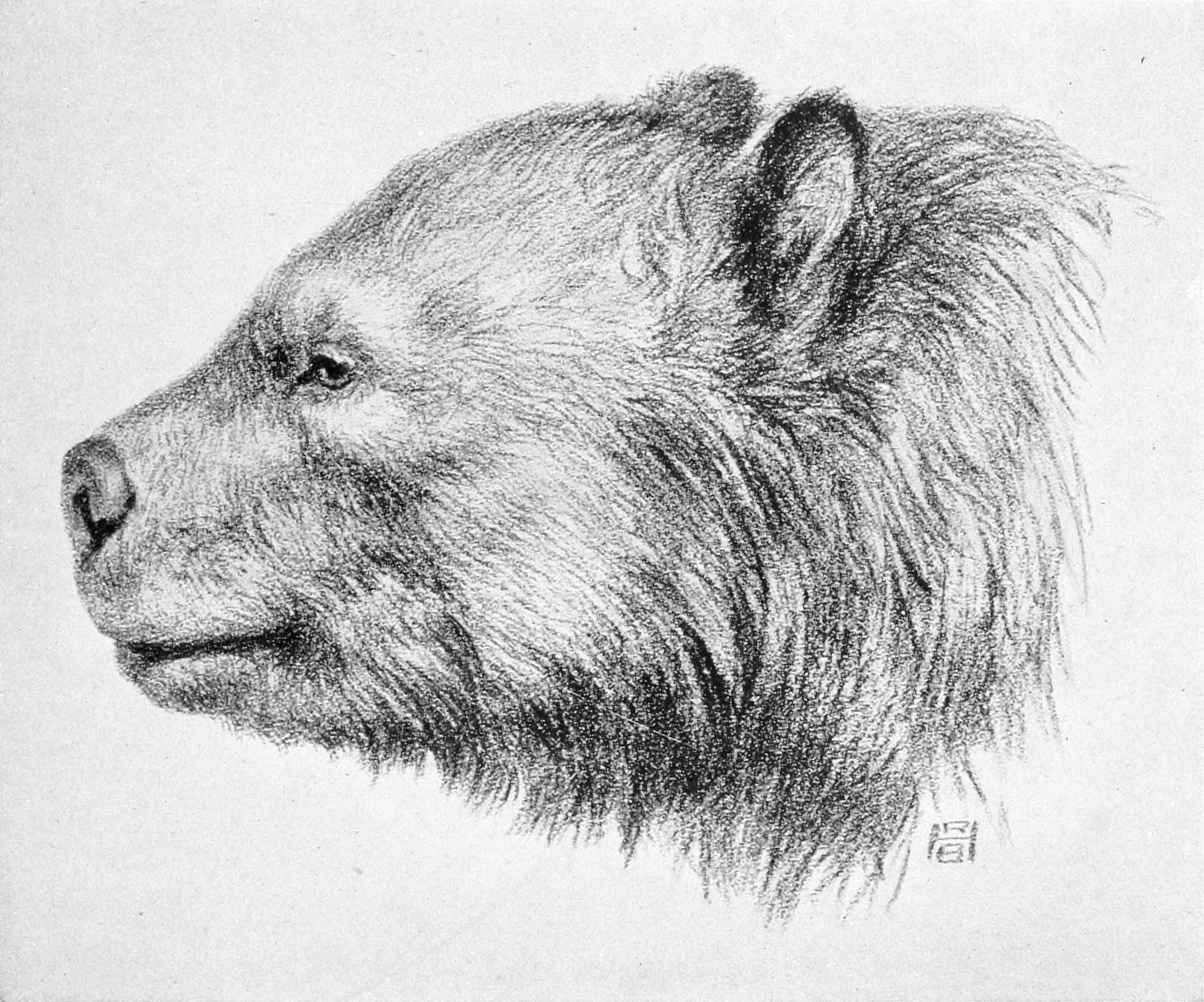 Further studies are still needed, but according to De Landa, “These two examples would make a total of five Ice Age bears from the Pleistocene period registered by this investigative project, which should give us a more complete biogeography of the Yucatan Peninsula 10,000 years ago at the end of this geological epoch.” 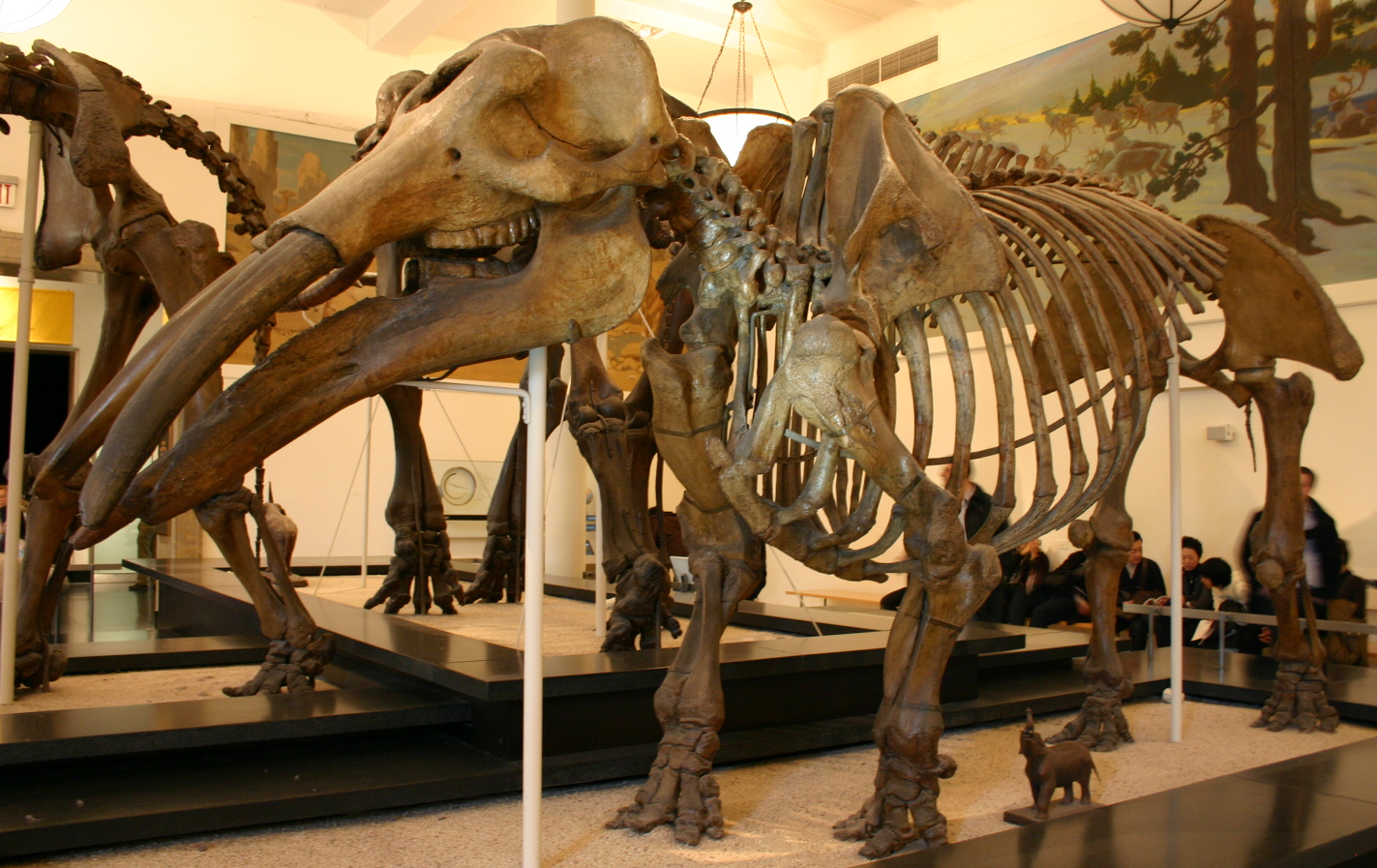 Moreover, hundreds of large bones from still unidentified species have also been found, as well as the enormous and intact jaw of a 10,000-year-old Gomphothere.

An essential aspect of the Great Mayan Aquifer project is to leave their underwater findings untouched.

Unlike conventional archaeology, which tended to extract the pieces for studies or to place in museums, Corey Jaskolski, Technological Innovator for National Geographic, developed a special software just for this project.

The software uses hundreds of images taken by underwater photographers to generate high-resolution 3D models of submerged archaeological elements without having to remove them from their original context.

The project has already begun to develop 3D scans of some of the more vulnerable archaeological pieces or those considered as high priority for the investigation.

“This way,” it says on their website, ” we can study these elements that contain important data on climate change, the first inhabitants of the Americas, and ritual activities performed by the ancient Maya around the cenotes.”

Want to Explore the Cenotes? There are numerous great cenotes you can visit and explore on your next trip to Playa del Carmen.

Closer to Playa del Carmen you can swim, snorkel, and even dive in some of these portals to the Netherworld. Just remember that even as guests to the region, there is still things we can do to help protect the environment and have less of a negative environmental impact on the region.

One of the most important ways in which we can help preserve the quality of water in the cenotes — and as a result in the Grand Mayan Aquifer — is to always use biodegradable sunscreen and bug repellant when swimming in these stunning bodies of water.

In addition, and perhaps it goes without saying, but take out whatever trash you take in. Cigarette butts are particularly toxic to the environment.

In the end, we are what drink.

Have you ever visited a cenote?

Tell us about your experience in the comment section below!

Ready to plan your trip to Playa del Carmen?

Our travel specialists can get you here for a great price! It's National Tequila Day! How to Choose a Good Tequila 2020 4 Best Snorkel Sites in and Around Playa del Carmen 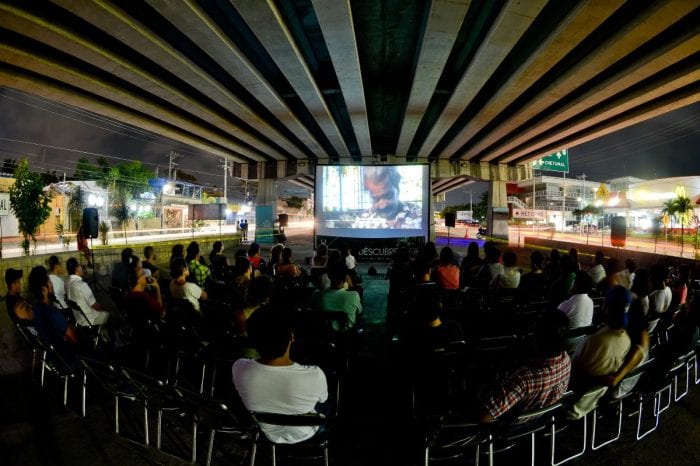 10 “Normal” Things to do in Playa del Carmen at Night