NEW Mayan Train from Cancun Airport to Tulum by 2023

Or not really the place for it?

Join me in this blog for the debate.

Thumbs Up Or Thumbs Down?

As an avid traveller, I simultaneously both admired and loathed the fact that the only real form of public transport in the large part of Mexico is bus.

Yup, you can literally travel from one end of Mexico to the other via some sort of bus (such as the ADO).

Sure, it’s cheap and cheerful for the young and adventurous backpacker but also long, uncomfortable, and arduous for the more mature traveller.

Oh – how my value systems have evolved…

Scheduled for completion by 2023 you’ll be able to hop off the plane at Cancun and jump straight on a train to Playa del Carmen or Tulum.

In a car, this can take anywhere between 30 minutes to an hour (depending on traffic) and I’m predicting the train to take at least half that time.

So, essentially you could be in Playa sippin’ on Pina Coladas just 15 minutes after walking out the doors of the airport.

Not to mention,  swerving the anxiety that comes with crazy Mexican highway driving…

I’m not judging ya’ll, but on the whole, the Juans of the taxi world are in a rush to get places. Just sayin’.

Scheduled for Completion in 2023

The Secretary of National Defense AKA Sedena will be spearheading the build of the northern section 5 of the Mayan Train, from Cancun to Playa del Carmen.

Building anything below ground in Quintana Roo could potentially be problematic due to the cavernous nature of the limestone, so the electrified railway is currently set to be built above ground.

Hence, we’ve stumbled on the first topic of debate.

It doesn’t exactly “go” with the lush surroundings, does it?

As much as I admire and encourage technological advancements (where relevant), when they potentially compromise the aesthetics of a tropical paradise,  it’s worthy of discussion.

Train With A View?

The pros I’m taking from the above-ground proposal are that no doubt there will be some views.

Everything worthy of admiration such as cenotes and ruins is encased by dense Mexican jungle.

As I try to visualise it now train riders will either see a sea of jungle, the highway, or flat, dry, dusty terrain.

Not exactly a train ride through the Swiss mountains, let’s put it that way.

I hate to go all Greta Thunberg on you put my guess is that they are going to have to chop down a serious junk of jungle to make this happen which also doesn’t sit well with me.

I might be wrong, it all depends on how high they plan on elevating this railroad.

Don’t get me started on rainy/hurricane season.

But hey, I’m not an engineer, what do I know?

Above-Ground Innovation From The Army

“We have already found a solution to build the infrastructure of the Mayan Train from Cancun to Tulum, it is the section with the shortest distance but the most complex of all the sections . We had to see that the work was finished soon, that it did not become eternal and we had to do it with a builder of absolute confidence, proven by its effectiveness, by its responsibility, so we decided after reflecting it well, analyzing it, that the best thing was to leave this section to the military engineers , “he said from Cancun.

“The entire section will be done as a second floor, the nearly 50 kilometers, a viewpoint, it will be the most beautiful train, the train that will allow you to better admire the beauties in the world, because it will go up from Cancun until Playa (del Carmen), there is no affectation because they are columns, beams, prefabricated whales, to be assembled ”, he added.

According to López Obrador, the proposal for the Mayan Train to be elevated in the section came from Sedena itself.

“The military, the undersecretary, the secretary of Defense, all presented me as a surprise, very recently, this option, this alternative of not going down, but up, and we decided to approve this construction strategy that is going to work,” said the leader.

The project was cancelled twice at the beginning and end of February. On an informative note, the Fonatur gave more details of the cancellation of the contest.

He explained that it seeks to “take advantage of the technical experience” of the Sedena in the “execution of public works” and stressed that this institution has “the knowledge, professionalization and human resources.”

In addition, this decision seeks to “strengthen budgetary rationality and discipline,” since the work is in the hands of the Army, there will be “significant savings.”

Whether or not working with Sedena is highly beneficial to the project or they were just looking to save a quick buck isn’t exactly clear.

Will It Ruin The Magic of Playa del Carmen & Tulum?

Section 5 has been stressed as being one of the most important stretches of the railway as it will connect Cancun airport to Playa del Carmen and beyond with far more ease.

Again, there’s always a catch 22 with these kinds of things…

Everyone who knows the area typically shares the same sentiment that the further south you go towards Tulum and beyond the nicer the scenery gets.

It’s untouched, and that’s the beauty of it.

Bye-bye Americanised Cancun and hello tropical bliss of Bacalar and beyond.

I joked years ago that Tulum would one day be at the same tourist level as Cancun.

Yet,  slowly but surely it’s getting there. Don’t get me wrong I’m not fully against the idea but there are many pros and cons to weigh up.

There will be more business and work for locals,  but at what price do we pay for the areas of natural beauty, and the wildlife that will be overrun and destroyed?

Should we be doing more to protect it?

I’d love to hear your thoughts in the comments section below as it’s a topic I’m extremely passionate about.

On January 29, the award of the construction of the southern section 5 of the Mayan Train was announced to a consortium that includes Grupo México and the Spanish company Acciona, for an amount of just over 17,815 million pesos (about 850 million dollars).

The Mayan Train is a López Obrador priority project with an investment of 6.294 million dollars for about 1,554 kilometres in the five southeastern states: Chiapas, Tabasco, Campeche, Yucatán and Quintana Roo.

Stay tuned to this blog post as we keep up to date with the railway developments and report back.

What Do You Think of The New Mayan Train?

Good or bad we would love to hear your thoughts.

Leave your words in the comments section down below and I will get back to you ASAP. 🙂

Also, I’d really appreciate it if you share this piece with your communities on social media.

Have a great day. 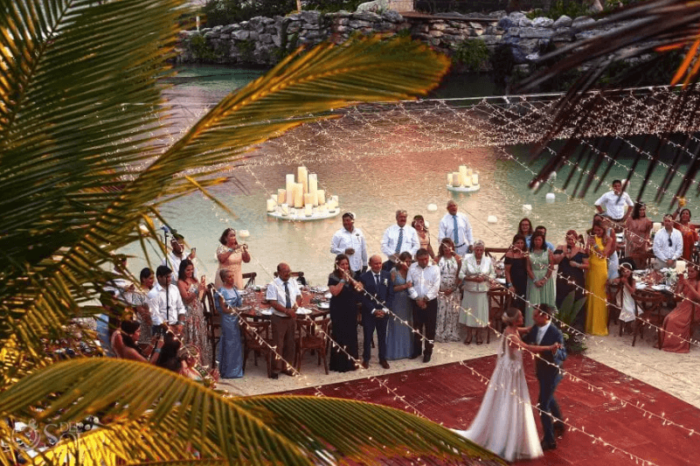 She is taking the job Mezkinz could never possibly do.

Hi Murdock thanks for reaching out. Not sure what you mean exactly please could you elaborate?

Do we know where the station will be yet in Playa Del Carmen?

It is yet to be confirmed. 🙂

will it be right at the cancun airport?

How far south will the train go?.. Just until Tulum or will it go further south until Bacalar?

I just learned about this train route. As a repeat tourist to the area, I think its an overall win for the area. One of the biggest drawbacks is the coastal highway trip to and from the Cancun airport by shuttle. We have had a couple of multi-hour trips due to traffic and construction.

With young kids, I see this being an adventure as well. Hop on a train and spend the day at historic landmarks or just enjoy travel by rail.

I do worry about the speed of the project which comes with environmental and safety concerns, but overall the train is going to be a fun addition to our future vacations.

Absolutely great. Get rid of all that polluting car traffic.

We just purchased in Akumal…..I think the train is a great idea……save the shuttle or renting a car……